Special Exhibition: Shifting the Everyday – The Japanese Everyday as Witnessed in JOJOLION

Special Exhibition “Shifting the Everyday – The Japanese Everyday as Witnessed in JOJOLION” at Lucca Comics and Games 2014.

An exhibition the Shifting the Everyday is being organized for Lucca Comics and Games 2014,  Europe’s oldest comic festival, which will be taking place in Lucca, Italy from Saturday 18 October to Sunday 2 November.

Manga and animation are usually viewed as entertainment rather than art in Japan. And they usually tend to be consumed in the midst of everyday activities, much in the same manner as eating a meal or taking a bath. Manga books are commonly found in restaurants, and people often read them in the bath or toilet.

The “everyday” has very much been a theme for contemporary art in Japan since the 2000s. The artists often slightly modify everyday objects. Their slightly different take on the “everyday” provides us with a critical perspective. The “everyday” could be regarded as the keyword in the present drawing together of entertainment (in the form of manga and animation) and art.

Gaining an awareness that popular culture in the form of manga, animation, and games, which merely seem to be products for entertainment, can also be a critical tool for a slightly different perspective on the everyday is one of the objectives of this exhibition. Visitors will hopefully recognize that this tool very much exists around them in the everyday, rather than in art museums and difficult philosophical tracts.

The exhibition will feature the manga JOJOLION by Hirohiko ARAKI, the animated productions of The Tatami Galaxy by Masaaki YUASA and Airy Me by Yoko KUNO, as well as a series of videos JSCO, H2Orzx and Yamanomichi by SHINCHIKA. They provide a slightly different vantage point on the everyday.

Born 1974. Ph.D course Graduate School of Letters, Osaka University. Specializes in manga and folklore. Interested in manga and museums and methodology for the study of modern social phenomena that is the basis for study of everyday objects around us. Currently research assistant at International Manga Research Center, Kyoto Seika University. Involved in numerous manga exhibitions at the Kyoto International Manga Museum and other venues. Co-author of Manga Myujium he ikou (Iwanami Shoten, 2014), Yokaiga no Fukei (Kawade Shobo Shinsha, 2009). Directed exhibitions of manga by Fujio Akatsuka (2011), and manga by Seiki Tsuchida (2014)

Shifting the Everyday will feature drawings by manga artist Hirohiko ARAKI, as well as videos from three other groups of artists. It will highlight various aspects of the media arts in Japan, including mass culture, contemporary art, and commercial and independent work. The 39 drawings by ARAKI were created for Part VIII: JOJOLION, the latest installment of his long-running Jojo’s Bizarre Adventure series. Part VIII received the Grand Prize in the Manga division of the 17th Japan Media Arts Festival.

Jojo’s Bizarre Adventure is a long-running manga series that commenced in 1987, featuring a whole range of protagonists. Part VIII: JOJOLION is the latest installment. It is an action mystery fantasy about Josuke HIGASHIKATA, a young man suffering from amnesia. He was discovered in Morioh in S. City, a fictional community in the Tohoku region, near a rocky wall stretching for 10 km that was created by the massive earthquake of 11 March 2011. Josuke stays with the HIGASHIKATA family (who have supernatural powers) and tries to piece together his identity. 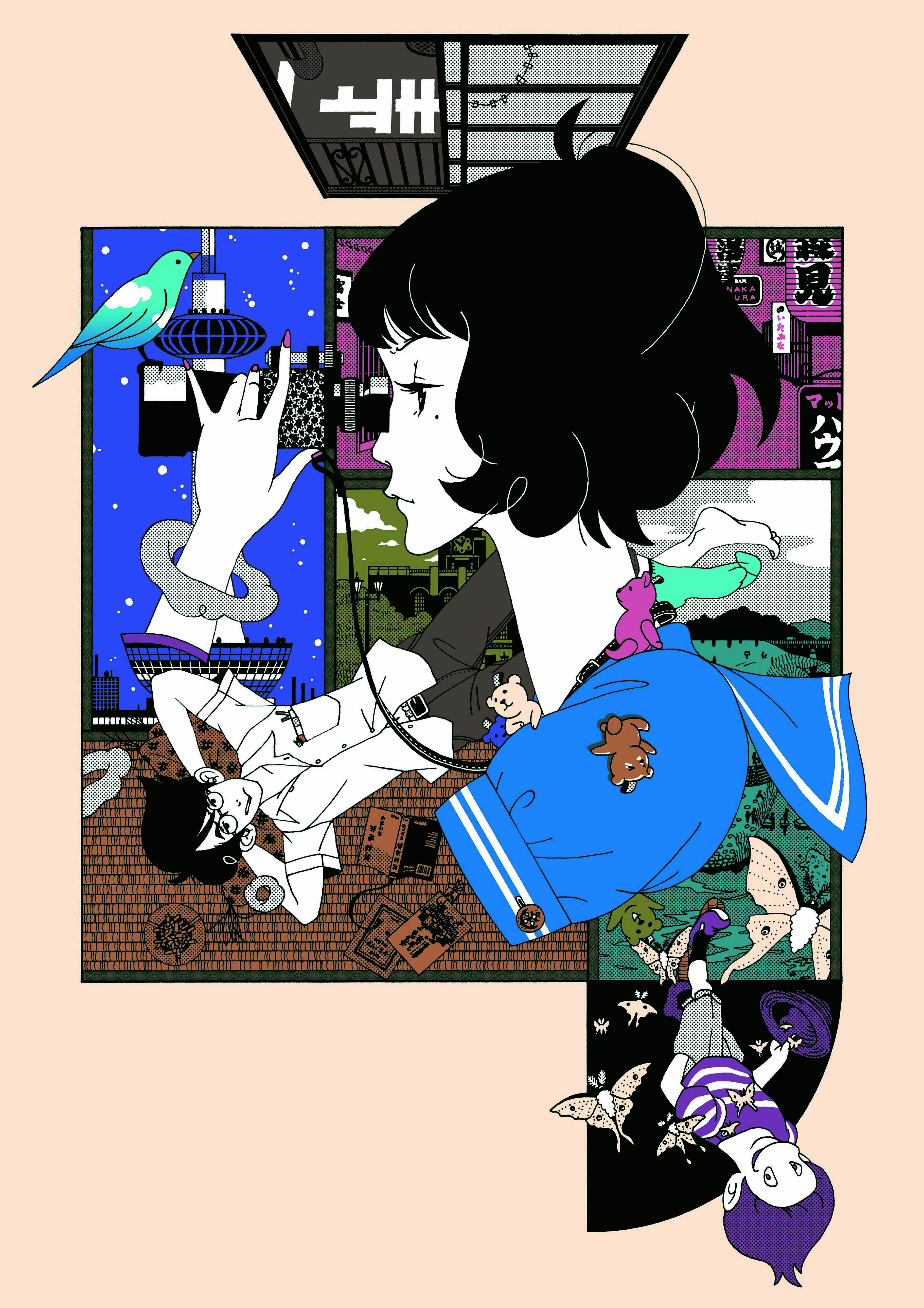 The story is told from the perspective of a third-year college student “I” reminiscing about his life on campus. “I” gets pushed around by his companion OZU and the enigmatic free spirit Master HIGUCHI. He cannot strike up an easy acquaintance with the girl AKASHI. What would have happened if “I” had chosen a different path? Directed by YUASA Masaaki, with UEDA Makoto and other high-prolife creators responsible for the compilation and script. An unusual and intriguing story about unproductive and foolish acts of youth that takes the audience on a journey through a strange world. 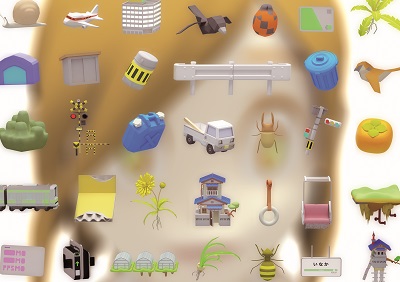 SHINCHIKA is a group of artists that employs a wide range of techniques, including film, lyrics, music, and 3D illustrations. It uses the Internet to edit a whole range of images relating to memories, personal stories, and the city. These three videos feature animation, games, toys and other objects permeating contemporary Japanese society and culture, as well as the personal memories associated with. The so-called popular culture of manga, anime, and games is not just something to be enjoyed by sub-cultures possessing specialist knowledge; it is the reality of contemporary Japan immersed in the everyday. The artists in SHINCHIKA freely employ and incorporate a whole range of techniques in their works, such as video and music, giving us a glimpse of their unique talent for expression. 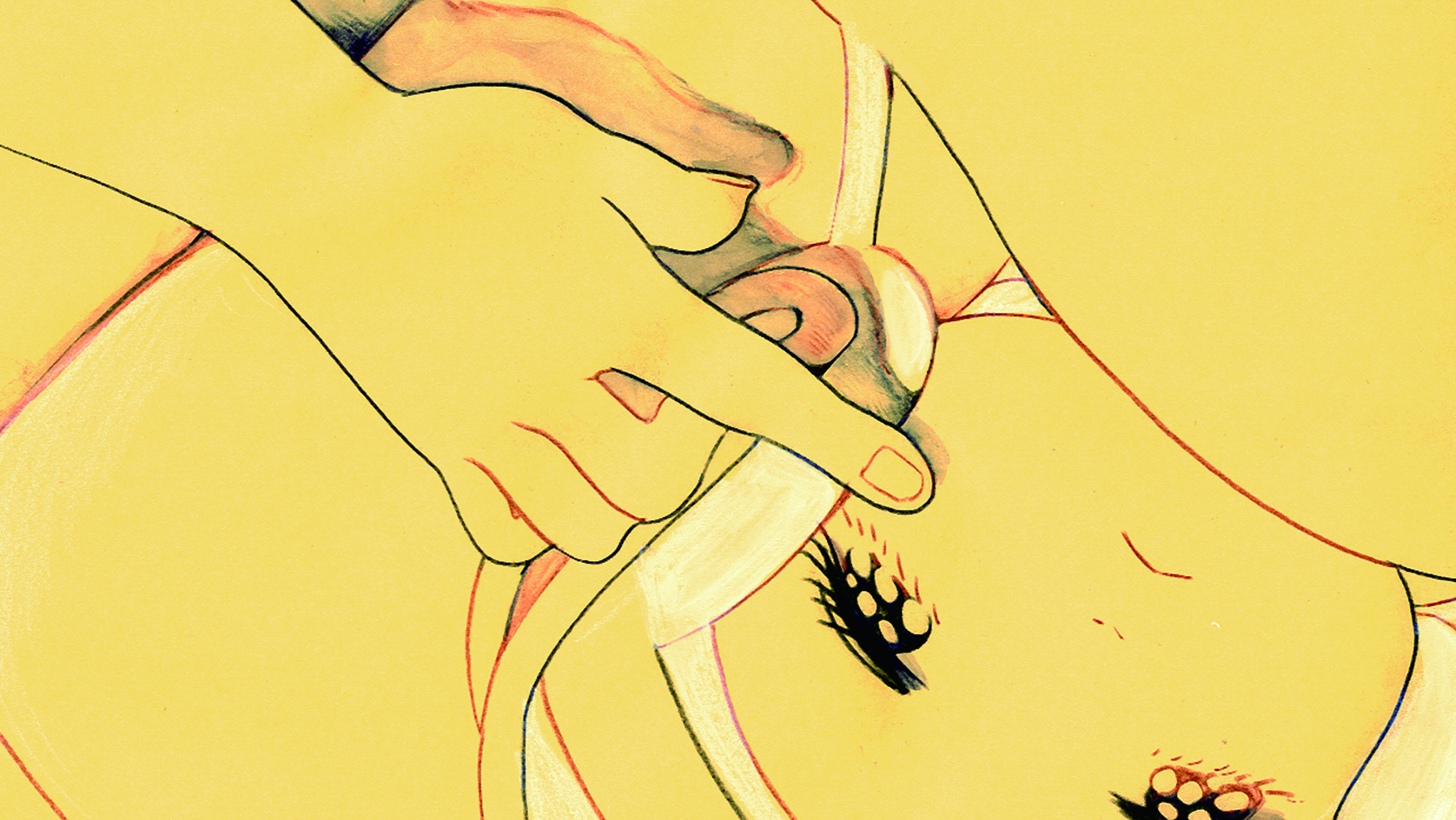 A subject is being medicated in a hospital ward for some kind of mysterious live experiment. When a nurse turns a switch, the subject transforms into a chimera, a weird hybrid of different creatures . . . So what results from the human desire for a non-human form? And what happens to the relationship between the subject and nurse? This work was inspired by a song of the same title by the artist Cuushe. The some 3,000 frames of this hand-painted animation took almost two years to complete. Time seems to stand still in the ward. But the constantly moving camera and soft colors create a unique story world.

Screenings of award-winning works in the Japan Media Arts Festival

Portrait of Japanese Animation
Videos from Japanese artists can depict extraordinary detail and an invisible sense of space, which is the result painstaking work by hand and a dogged determination. This program will feature a total of 9 works reflecting the everyday in contemporary Japan through very Japanese perceptions and techniques. Kunio KATO was the first Japanese to win an Academy Award for Animated Short Film with his work La Maison en Petis Cubes (The House of Small Cubes).   It provides a picture book world of detail and nostalgia conveying important feelings to the viewer. The white dots in ISSEY MIYAKE A-POC INSIDE recall memories and perform a moon walk. The painstaking work that went into each of the works will provide something for all five senses of the viewer.

JAPAN POP ENERGY
A selection of award-winning works in the Japan Media Arts Festival to give viewers an idea of contemporary Japanese pop culture. berobero by Hideyuki TANAKA is set in Tokyo’s Shinjuku district. Young artists such as Wataru UEKUSA and Hiroyasu ISHIDA skilfully draw on styles of Japanese anime. They appear to provide pop, but they are also very much stating their own ideas.
Program Director: Mitsuko OKAMOTO (Professor & Director of Graduate School of Film and New Media, Tokyo University of the Arts)

Inaugurated in 1966, “Lucca Comics and Games” is a major and traditional comic festival in Europe. Every year, it takes place in the walled town of Lucca near Pisa, Italy, from the end of October to the beginning of November. Today, during its period, various events are held, highlighting Comics, Junior, Music, Games, Japan Palace and Movies.

The Japan Media Arts Festival has participated in the “Lucca Comics and Games” convention since 2013. Last year, Mr. Yoot Saito was sent to Lucca. He is a Japanese game designer who received the Japan Media Arts Festival 2000 Digital Art (Interactive Art) Division Excellence Award. At “Lucca Comics and Games 2013,” Mr. Saito gave a presentation on his know-how of developing games, including console games and smartphone games.

This year, the special exhibition of the Japan Media Arts Festival will be held at Palazzo Ducale, the main exhibition venue for Comics, under the co-direction of the Agency for Cultural Affairs, government of Japan. This special exhibition is designed to introduce such unique expression abilities and artist skills as seen in the media arts of Japan.

In particular, original pictures drawn by Mr. ARAKI Hirohiko for JOJOLION will be exhibited. Mr. Araki received the Japan Media Arts Festival 2014 Manga Division Grand Prize for his pursuit of the theme of “celebration of humanity” and frame layout expressions as well as for having performed a challenge to develop a story from fiction to reality. In addition, contemporary Japanese creativity, as manifested in image and sound works, games and animations, will be introduced.

Excerpt from a press release (July 3, 2014) of “Lucca Comics and Games 2014”
Mr. ARAKI Hirohiko has nurtured a very special relationship with Italy.

Among his manga works published in Italy is Baoh, one of his early works. The original video animation (OVA) with the same title has made Mr. Araki a regular favorite in Italy. In 2013, he collaborated with Gucci, an Italian fashion brand, and his works were decorated with the windows of Gucci stores around the world.

Mr. Araki’s representative manga Jojo’s Bizarre Adventure has been carried in a Japanese publication for nearly 30 years. Some of the Jojo’s Bizarre Adventure series, made up of Part I through Part VIII, were also published in Italy. This long-running manga has been extremely successful in the comics market, still continuing to influence many fields. Locales and characters with Italian names appear quite often in it. Mr. Araki creates powerful facial expressions of characters, their sturdy physiques often with complex poses, and colorful, elaborate costumes so stylishly. “Stands,” or supernatural powers, which are used in fighting, are expressed felicitously as a visible fantasy.