SAKAKIBARA Sumito Born in Hokkaido, 1980. Lives and works in Nagano. Sakakibara grew up in Hokkaido, and went to UK when he was 15 years old. He graduated from MA Animation, Royal College of Art. He currently lives and works in Nagano after he finished residencies such as La maison des auteurs in Angoulême, 2006 and Sai Comics in Korea, 2007. Selected works include “Flow” (Grand Prize of the 9th Japan Media Arts Festival), “Kamiya’s Correspondence” and “In The pale Water”. “E in Motion No.2″ made through the Project to Support the Nurturing of Media Arts Creators in 2013 was presented at 16th DOMANI: The Art of Tomorrow exhibition and other places. 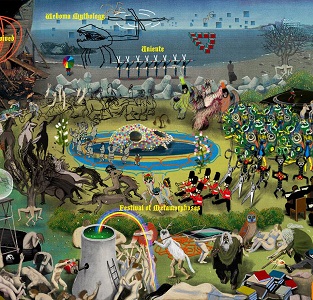 E in Motion No.2, Sumito Sakakibara

A nominated work ”E in Motion No.2” intends to be on a borderline between a video and a painting. To create three-dimensional space, the installation of this work has an idea of myth’s structure of which the notion of time sequence is basically twisted. The images in the animation are landscapes in Hokkaido where Sakakibara grew up, scenes of memories and fables based on the Ainu’s myth. Support: Project to Support the Nurturing of Media Arts Creators 2013

Japan Media Arts Festival Presentation at the Japan Party
The Annecy International Animation Festival, one of the world’s big four Festivals in the animation genre, began in 1960 when the animation division of the Cannes Film Festival split off to become an independent event. It is the official and oldest animation film festival of ASIFA, the Association Internationale du Film d’Animation.

The festival held in June each year is also known as the world’s largest and attracts animation people from every part of the globe. Besides the competition screenings, there is also a wide range of conferences, international film market, and other events. Japan Media Arts Festival will invite animation directors and others taking part in the festival to the Japan Party, where the festival’s activities and prize-winning works and their creators will be introduced.