The manga artist Ai Tanaka and the editor and manga researcher Nobuhiko Saito will give
a talk at the Seoul International Cartoon and Animation Festival (SICAF 2014), where a selection of short animated works entered in the Japan Media Arts Festival will also be shown.

The manga artist Ai Tanaka who gives a talk for this event received the New Face award in the Manga Division of the 16th Japan Media Arts Festival for her work Sennen Mannen Ringo no Ko (Apple children of aeon). Nobuhiko Saito, a juror at the Japan Media Arts Festival 2012 and 2013, will talk about how she became a manga artist and what inspired her to make Sennen Mannen Ringo no Ko with her as a moderator. As she has got a chance to have a serialized manga for a magazine by her dojinshi (self-published manga), he will also describe magazine culture and how a dojinshi is published in Japan, as well as a social situation related to manga, comparing them to Korean lively online comics. 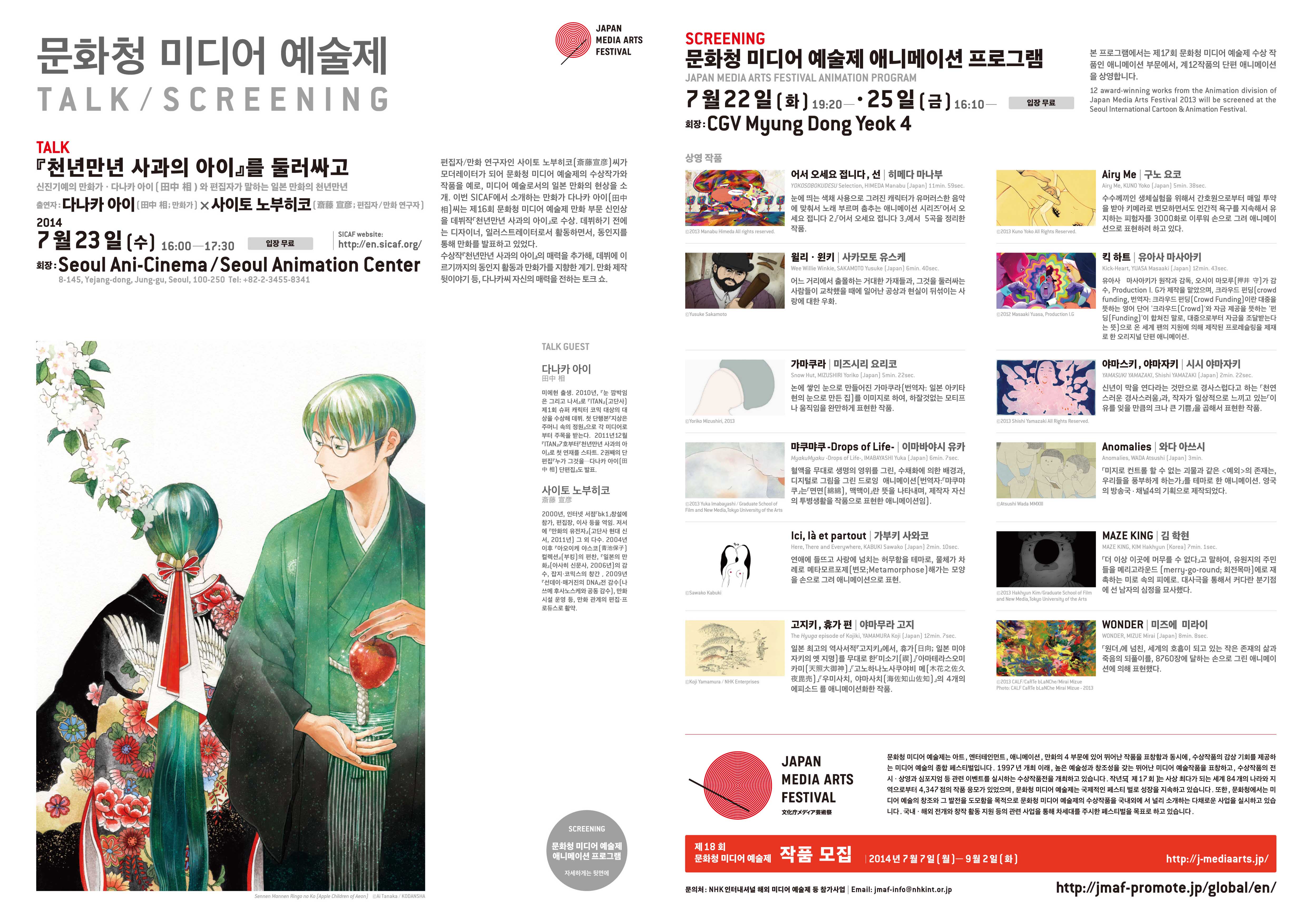 ■Speaker’s Profile
Ai Tanaka
Manga artist
Born in Mie prefecture. Made her debut in 2010 with Mabataki wa Sorekara (A wink comes later), which received the grand prize of the ITAN (Kodansha) 1st Super Character Comics Awards. Earned media acclaim for Chijo wa Pocket no Naka no Niwa (The land is a garden in your pocket) Sennen Mannen Ringo no Ko (Apple children of aeon) serialized in ITAN (no. 7) from December 2011. A second volume of Tanaka's short works, Dare ga Sore o (Who did that?), has also been recently published.

Nobuhiko Saito
Editor & manga researcher
Senior editor and director of online bookstore blk, which he helped establish in 2000. Author of Manga no Idenshi (The genetics of manga) (published 2011 in the Kodansha Gendai Shinsho series) and various other works. Since 2004, compilation for manga artist Yasuko Aoike. Supervising editor for Nippon no Manga (The manga of Japan) (published in 2006 by the Asahi Shimbun). Co-supervising editor (with Fusanosuke Natsume) for Sunday Magazine no DNA (Sunday magazine DNA) (published in 2009). Has founded magazines and comic books, runs manga-related facilities and edits and produces manga projects.

Award-winning works from the Japan Media Arts Festival 2013 will be screened at the Seoul International Cartoon & Animation Festival (SICAF), which is being held 22-27 July in the South Korean capital of Seoul.

The Seoul International Cartoon & Animation Festival is the biggest of its kind in South Korea to see interesting and stimulating animated works and comics from all over the world. It comprises screenings of works entered into the official competition, displays, as well as markets for discovering new and upcoming animation projects and producers.