This program comprises 14 works from award-winning works and jury selections of the Entertainment and Animation Division from the Japan Media Arts Festival 2014. 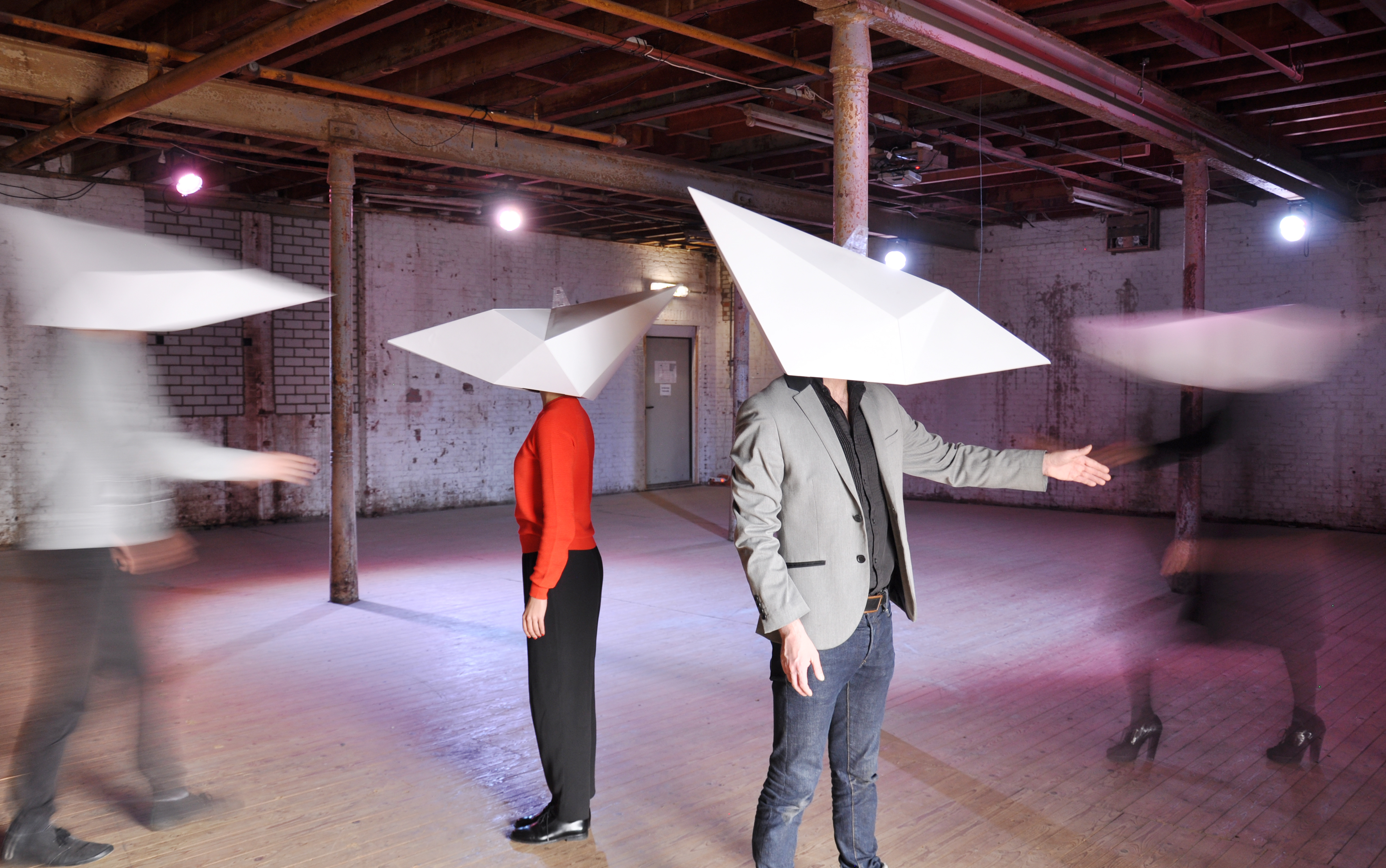 An interactive installation giving players a new perspective on reality. 3RD is inspired by the increased use of social media in public space, and the changing way we perceive the world around us. People are invited to put on wearable bird-like sculptures. Through a video screen inside these “helmets” people see themselves from a distance. They become their own digital alter ego. This creates a surreal sensation where reality starts to feel like a digital game environment. Furthermore, the anonymity of using helmets makes people search for physical contact, thereby linking the physical and virtual domain. Within 3RD a new social interaction starts to form. 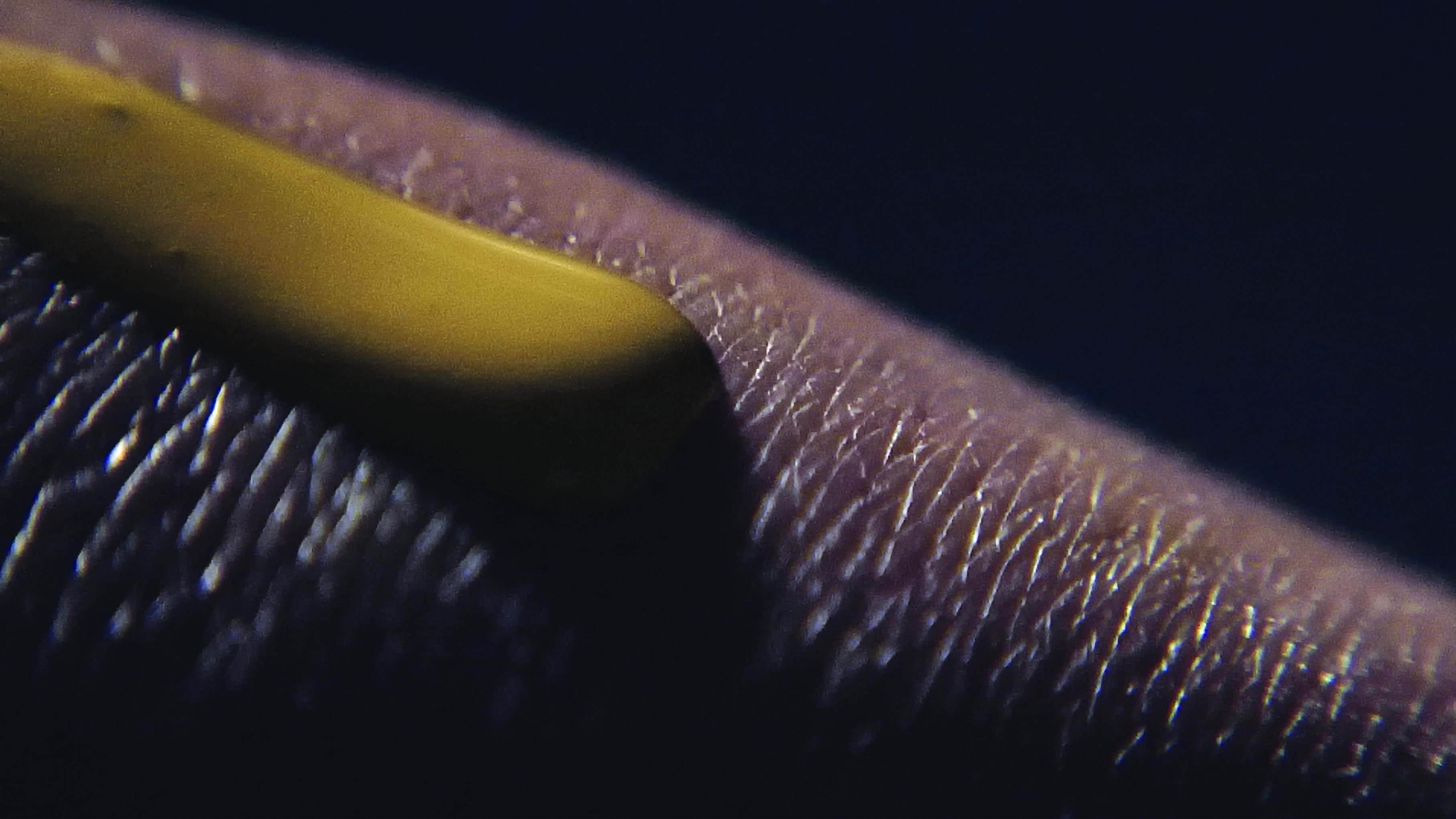 Kintsugi is a video-dance work based on an autobiographical story. In 2003, MIGNONE and PANEPUCCIA had a road accident, the serious consequences of which drastically changed their lives. In order to create this dance-for-camera piece, MIGNONE used the crutches that had accompanied her for years. Kintsugi, the Japanese technique of mending broken ceramics with goldfilled resin, is used as a poetic metaphor for physical and emotional healing processes. This technique has its roots in the belief that the object is more valuable and beautiful with its history revealed. A girl faces her journey of healing through the search for a new balance. Her tears turn into golden resin that repairs her scars. The absorption and transformation of trauma leads to the development of new possibilities. 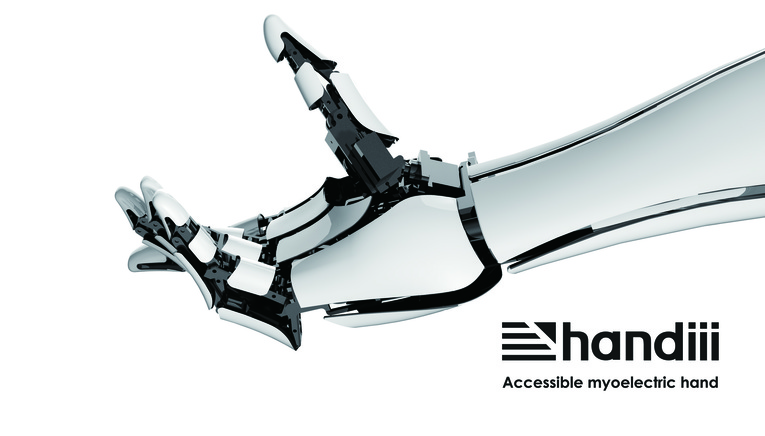 handiii is a myoelectric prosthetic hand designed to offer flexibility and choice. Myoelectric bionic arms are prosthetics that people who have lost limbs can control intuitively through faint electrical signals (myoelectric) in the muscles, which are measured on the skin remaining on the arm. The technology has been around since prewar days but its extremely high cost has limited its penetration of the market. handiii uses a 3D printer and smartphone in order to keep the cost of the materials under 30,000 yen. Whereas previous bionic limbs would attempt to conceal the loss of the hand by imitating human skin in the design, handiii offers a choice of look to match the environment in which it is being used or the feelings of the user, just like a watch or sneakers. Ingress is a mobile application which transforms the real world into a massive multiplayer mobile game based on real-world locations, including cultural landmarks such as public works of art, historical sites, and unique works of architecture. Ingress uses GPS and a global mapping database to merge a fictional world with the real world. The Ingress experience is designed to motivate players to leave their homes, explore and interact with other players in the world. It is also designed to lead players to places of unexpected beauty or cultural significance no matter where they are in the world. 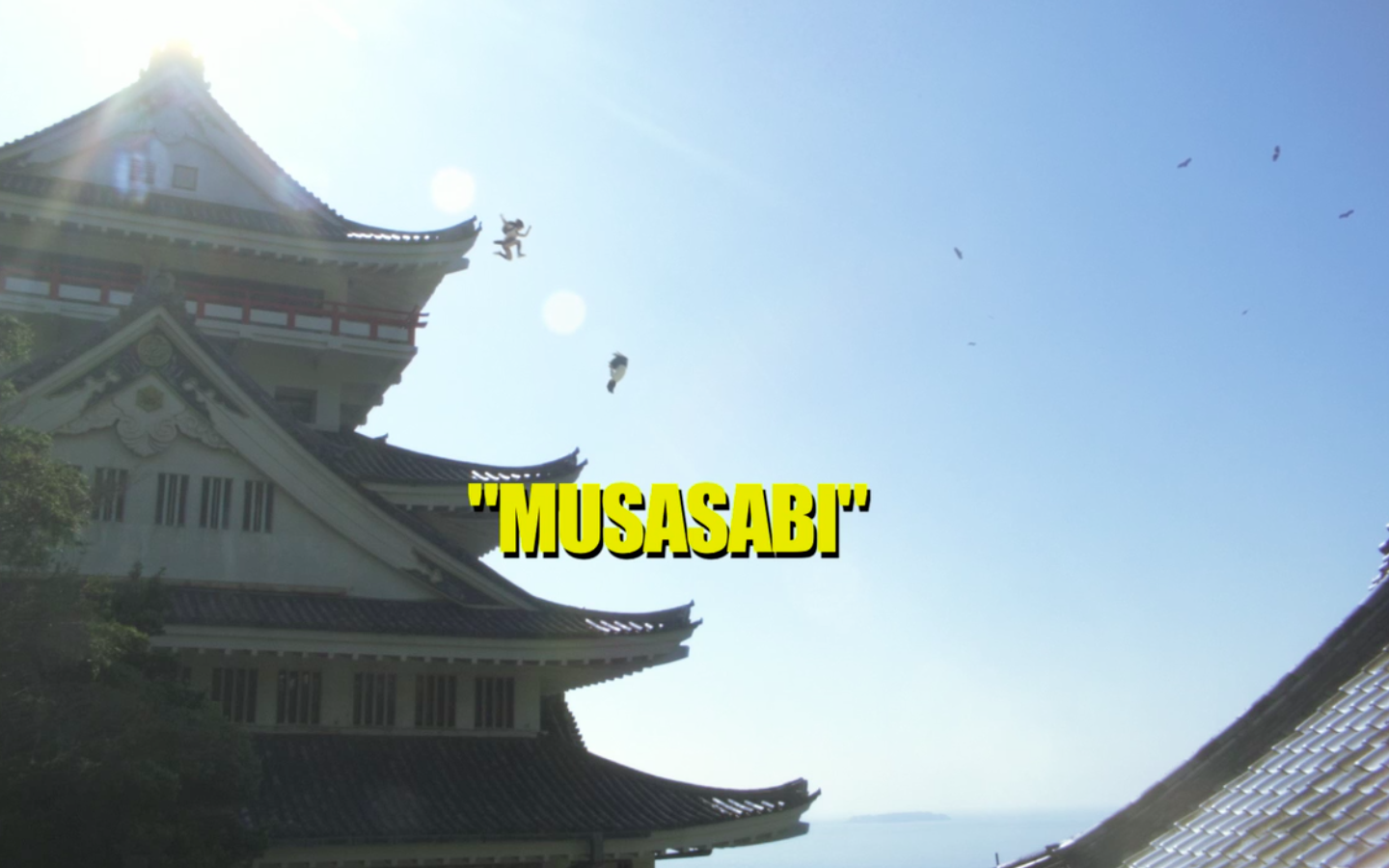 In this video work two perfectly ordinary female high school students race around all the corners of their town like ninja. These girls have breathtaking physical abilities and while chasing each other they perform lots of impressive action stunts. Produced as a Web commercial, the footage is made to look like it was shot by the girls with a phone camera. It created a lot of buzz, achieving 6 million views in one month after it was published online. 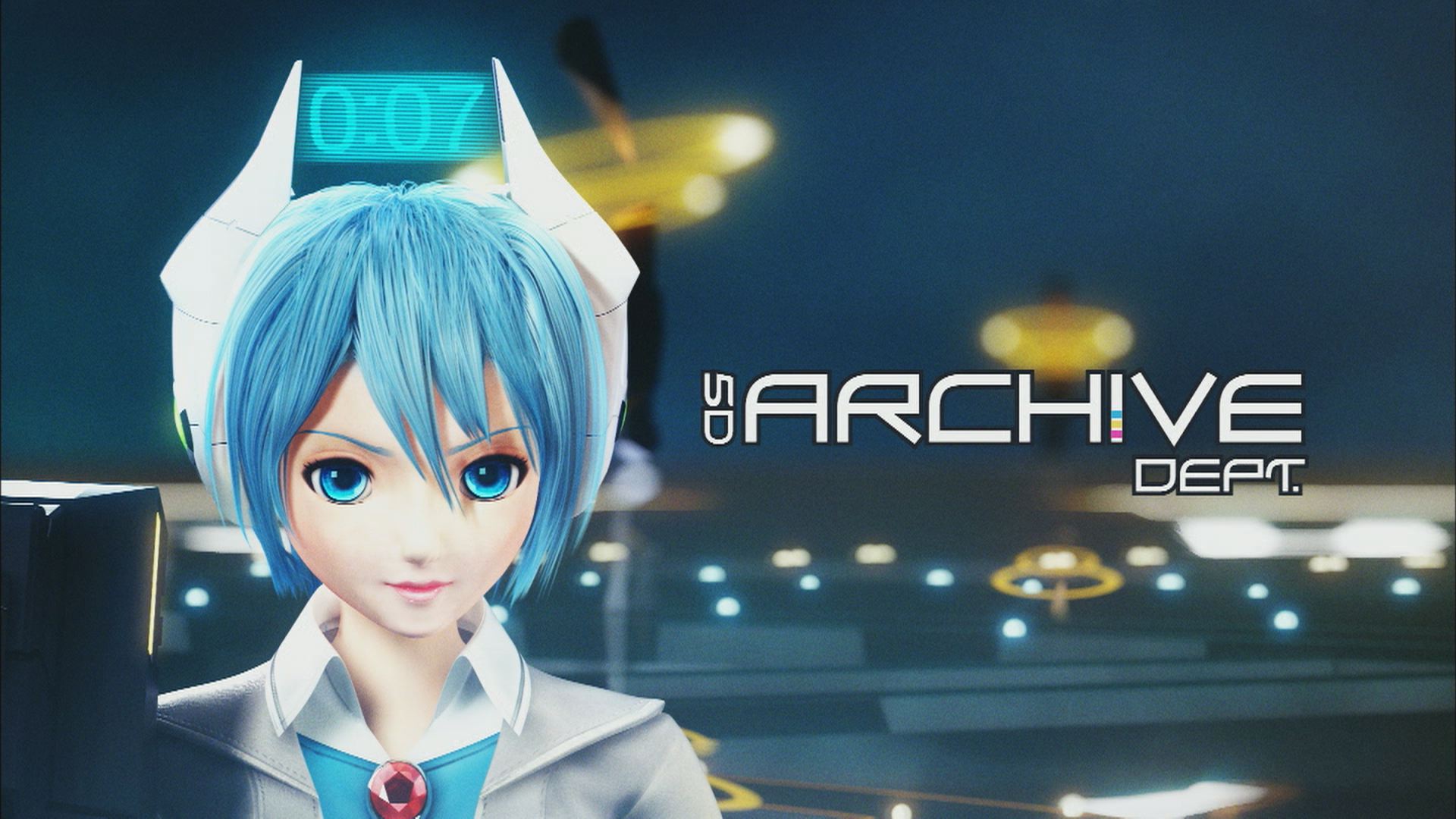 This project preserves and communicates scenery and culture for the next generation through video. It is produced by Fukuoka's KBC as a TV show promoting the local region on the theme of “traditional sound”. The sounds of traditional crafts (“playing” fibers on a Hakata-ori loom, making Japanese paper, planing wood chips) were recorded and edited to become the introduction for the song GARNET, by Kyushu idol group LinQ, who then performed it in a Hakata-ori studio. It is a video archive of traditional technology mixed with contemporary sensibilities. 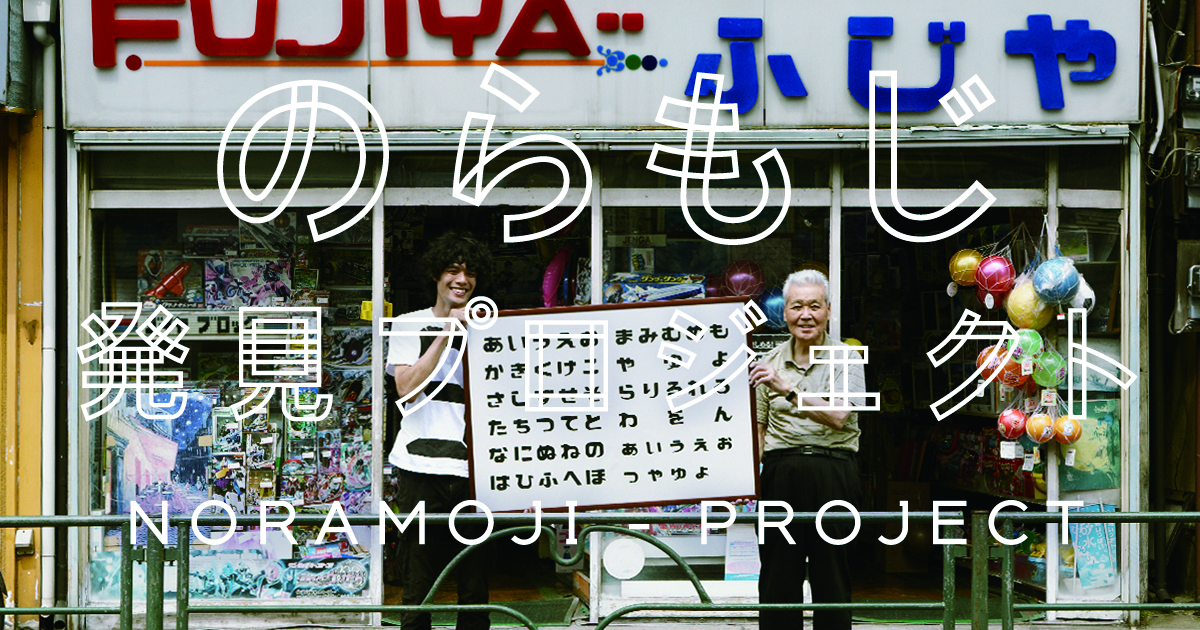 The old fonts used on the signs of local stores may not be as sophisticated as a precisely designed commercial font, but these “stray lethers” (Noramoji) still have their own unique charms. The “stray letters” discovered through the project are analyzed and then converted into usable computer fonts. The profits generated by the sales are given back to the owners of the original signs, helping to support their maintenance for future generations, passing on the scenery of regional towns and cities, and creating what we might call a typographic folk art movement. 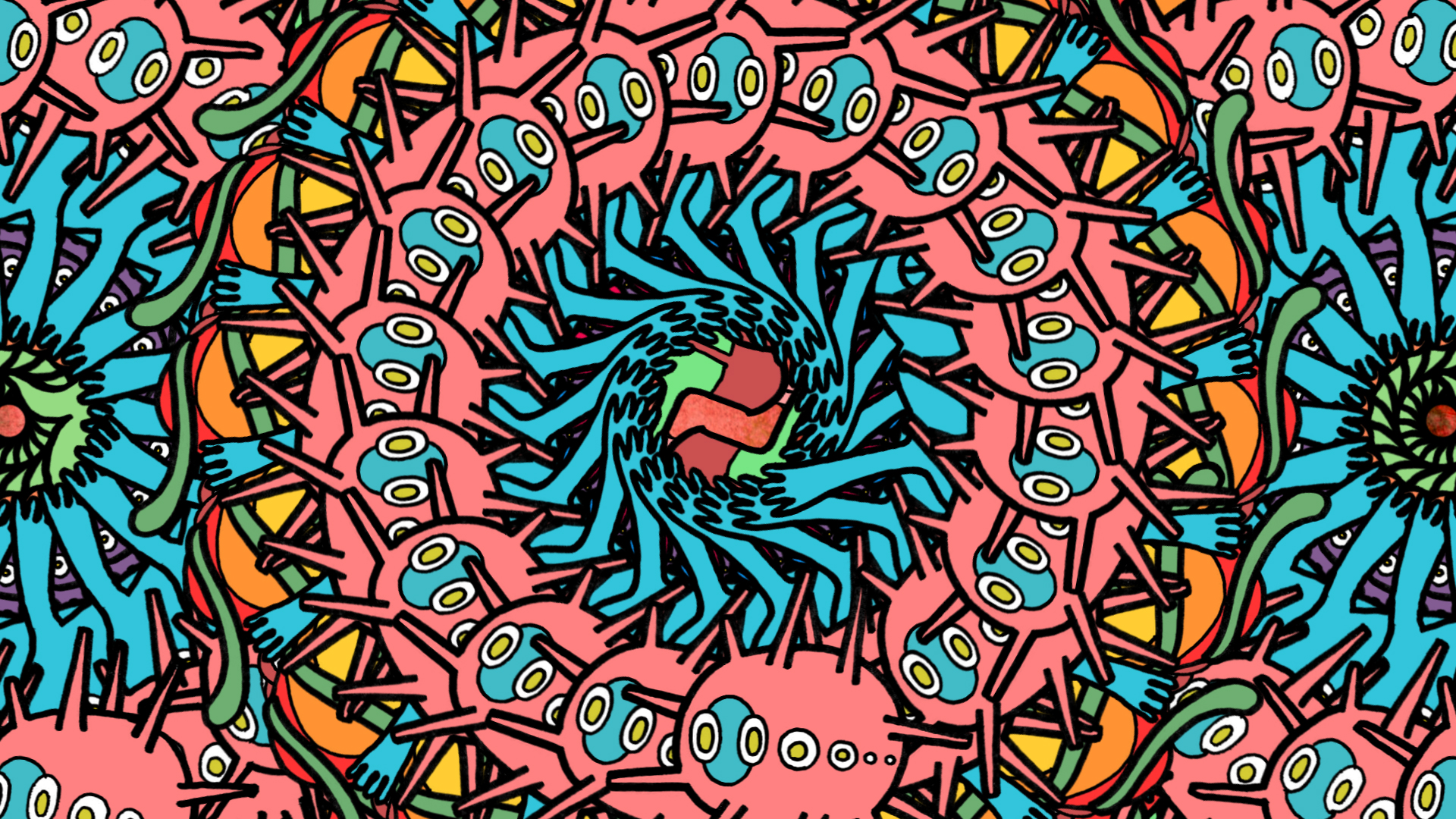 This is a music video for a song by Japanese musician TOKUMARU Shugo, who in 2014 celebrated ten years since his debut. It is also a homage to Norman MCLAREN, marking the centenary of the father of experimental animation. It realizes the festiveness that creates music and animation through an exuberant metamorphosis of dynamic animating and organic graphics. 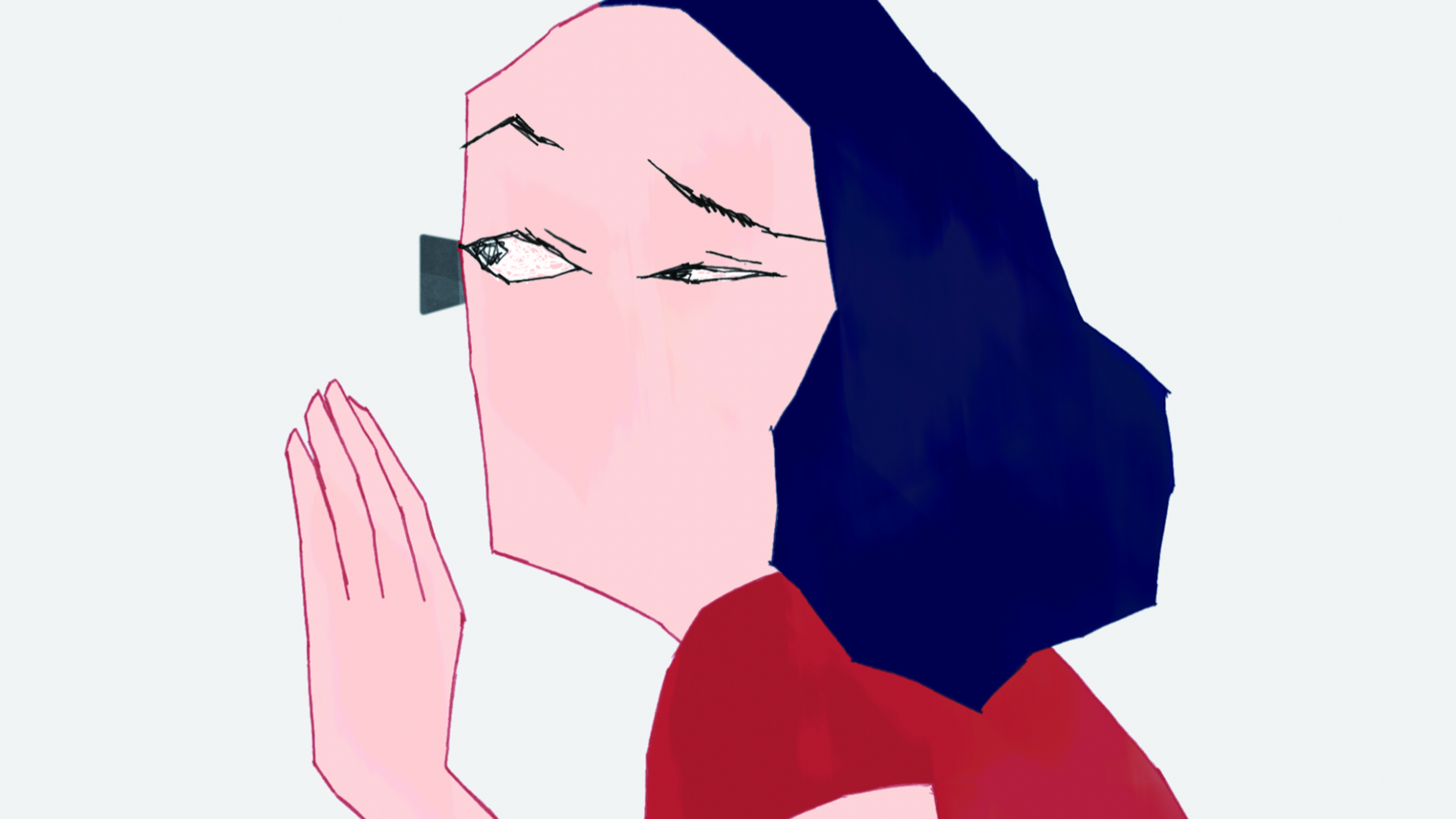 This work expresses the concept of a boundary as a quadrangle that changes shape and size. A boundary is something arising from the position of a certain subject, and which influences the way we see or think. In this work, a young girl in red clothes is sleeping in a space surrounded by boundaries. When she awakes, she feels confined. The work was partly used in ONODERA Shuji's performance The Viewer (2013). 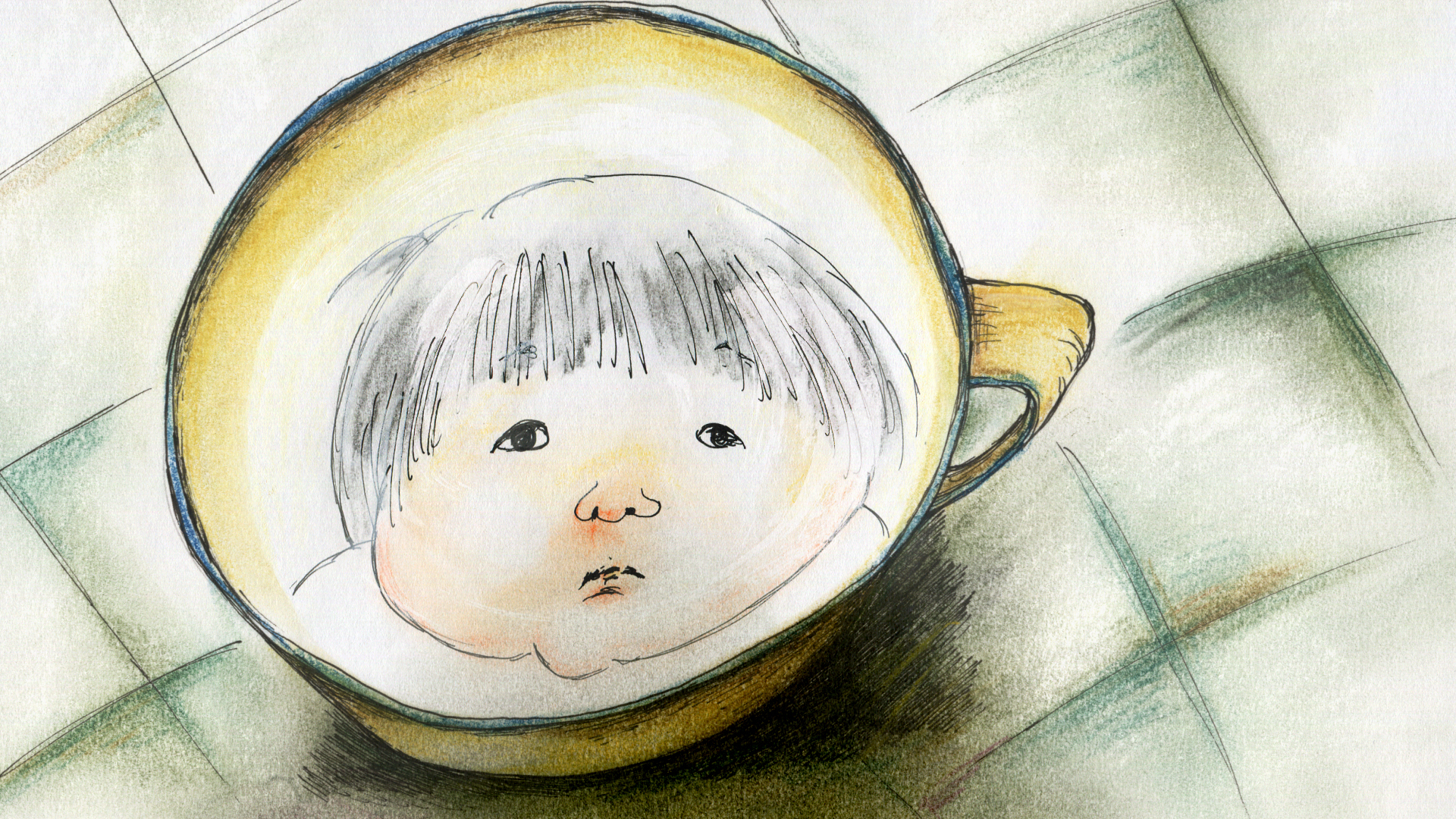 A father lies to his daughter Nunu that there is a cow inside her cup of milk. She believes him but when she has finished her milk, there is no cow. Nunu gradually stops trusting her father since he is always lying. This animated short film is based on the childhood memories of ZHU's father. The film depicts the father from the point of view of the child, scooping up the various lies that appear in everyday life. Hand-drawn on paper, the vibrant animation utilizing soft pastel textures recreates the atmosphere of a small town in Jiangnan in China in the 1980s. 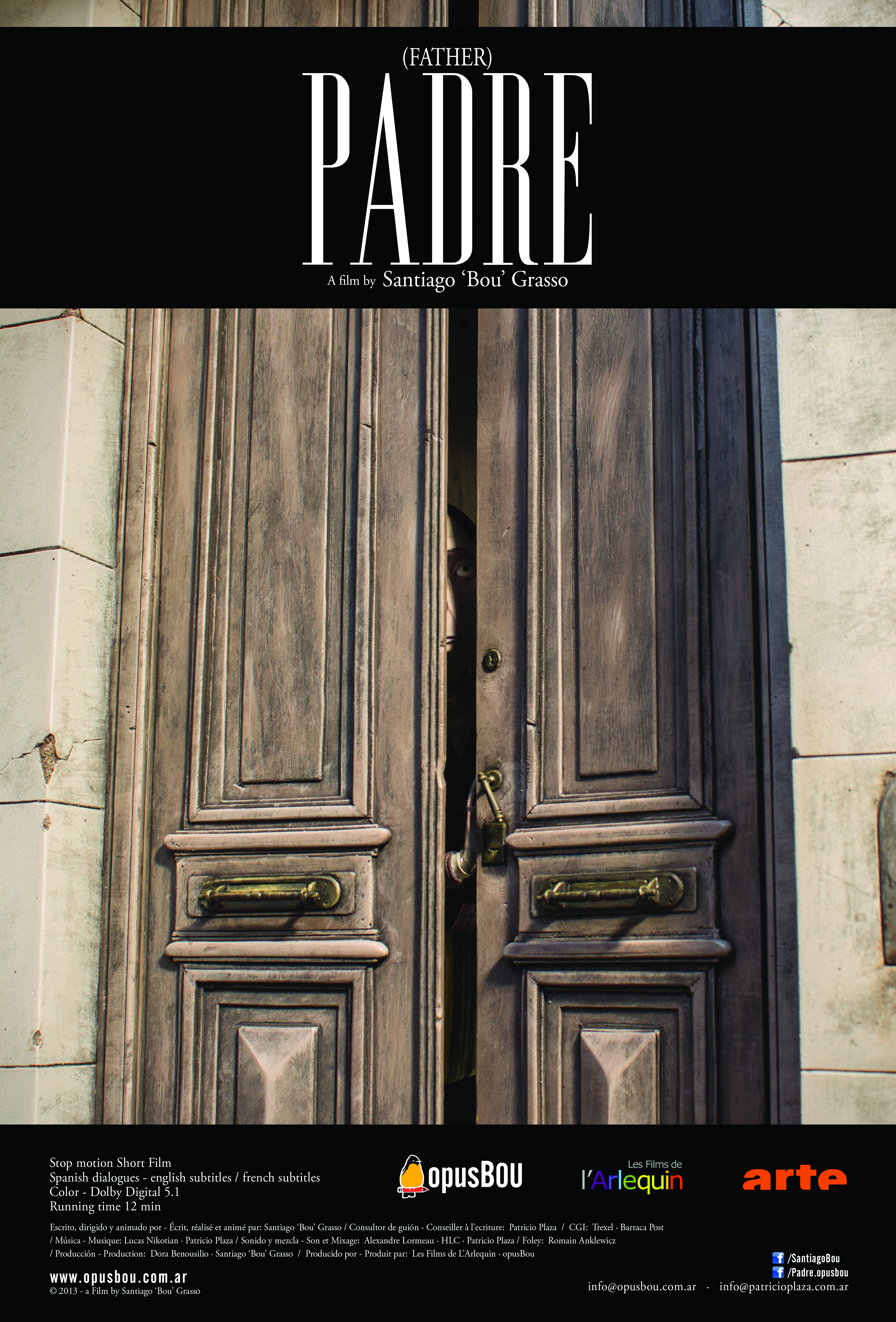 Argentina, 1983. While the military dictatorship comes to an end and democracy starts to awaken, a solitary woman dedicates her existence to taking care of her sick father, a former military commander. Although the outside world pushes for action and change, the woman sticks to her daily routine, driven by the pendulum of a clock. The film was made over a period of three years using stop motion animation and 3D computer graphics. Intricate models of people and props were also photographed and then processed digitally, adding a distinctive texture to the imagery. It is a beautiful portrayal of the everyday through richly expressive animation. 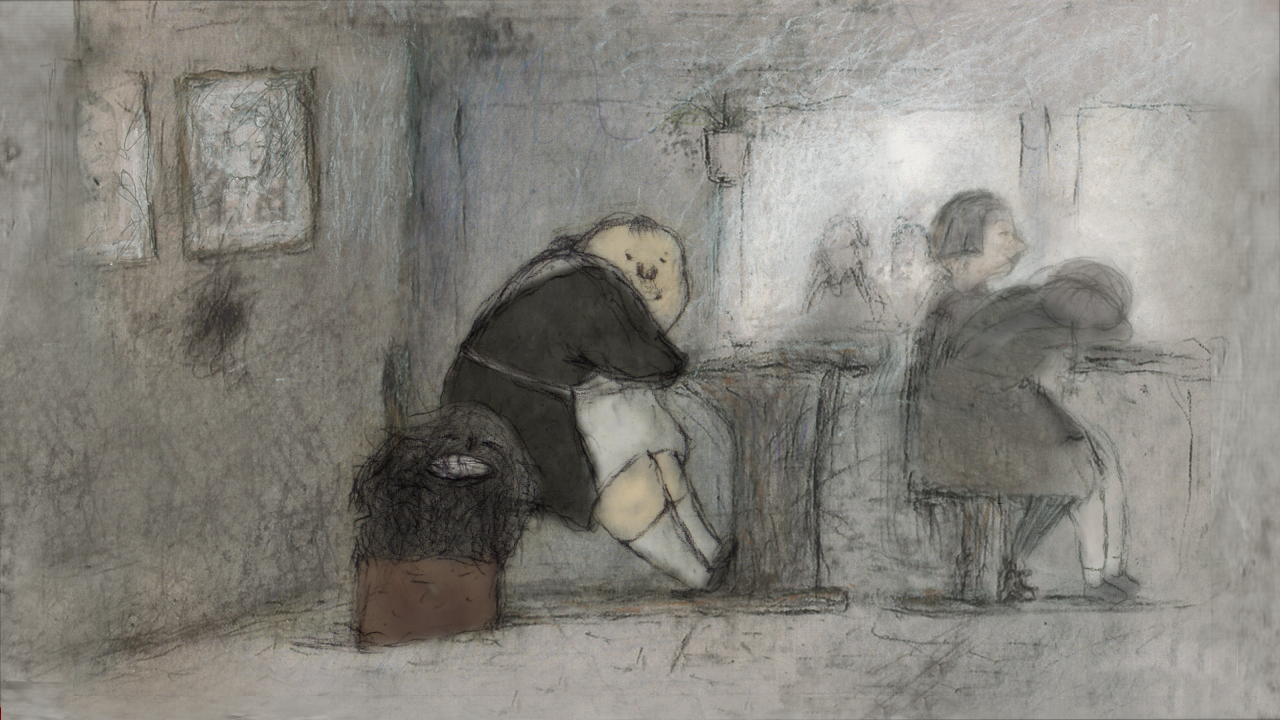 A little girl suffers from an emotional wound. In her imagination, the “wound” takes on a life of its own, in the form of a shaggy creature that becomes her best friend. They grow up together and, firmly ensconced in the mind of the girl, the wound starts to control her life completely. Based on impressions from the author's own childhood, the starting point for the film was the creation of a shaggy black creature, The Wound, which increasingly gains presence and becomes the girl's closest companion. This animation portrays the relationship between the girl and the wound in pictures that are simultaneously both nightmarish and hauntingly beautiful.