The festival came under the umbrella of the Embassy of Japan in Bulgaria’s Japanese Culture Month and was even bigger this year through a link-up with COMIC CON, the largest comic festival in the United States. More than 20,000 people visited during the two-days event.

Ryo Hirano’s studio was recreated in the middle of the exhibition booths at the Japan Pavilion. The displays included Japanese editions of the books and original drawings for Fantastic World together with a screening of a video preview.

This was the first ever exhibition and screening of Hirano’s work in Bulgaria and the many visitors also had the opportunity to appreciate the books. They showed great interest, carefully examining each drawing, publication, video work and other displays in turn. Hirano, the author, also drew pictures in the exhibition booth during the event and demonstrated the production process, winning many new fans in the process through his interactions with the visitors. Ha-chan, the Fantastic World mascot, was hugely popular and many visitors had their photos taken with him.

Many visitors also spoke of their desire for English and Bulgarian language versions of Fantastic World. Ryo Hirano’s Bulgarian debut was a resounding success.

The public talk was held from 16:00 on Sat. 9th September in front of an audience of more than 120. Ryo Hirano started by introducing himself by means of a screening of his animation, Kappa no Ude (The River Goblin’s Arm) and then spoke about the inside stories of his works so far. The audience included many students of animations and comics and their questions covered the range from production techniques to how he got started as a professional and his personal time management. After the talk, Hirano also signed autographs, had his picture taken with members of the audience and met many of them at the booth.

This was the first participation in Bulgaria but the interest in Japan is so high here that the Japanese language is even taught in some public sector primary schools. The event included not only animations and cosplay but also opportunities for the many visitors interested in the broader aspects of Japanese culture to enjoy more traditional activities such as flower arranging, paper cut-out pictures and calligraphy. For these Bulgarian visitors, the event provided a fascinating representation of where Japanese culture is today.


I was able to meet many of the local people over the two days at the exhibition and talk. The response was great. They took an interest in my comics and other works and asked a lot of questions. It has all been very good study and encouraging for me. I was especially happy to participate because I had been thinking for some time I’d like one day to go to the COMIC CON animation and cosplay gathering.

Ryo Hirano’s studio was replicated at the Aniventure Comic Con 2017, which was held in the Bulgarian capital Sofia. It showed originals, color digital renderings, designs, storyboards, and so on, mostly associated with Fantastic World, which selected a Jury Selection in the Manga Division of the 18th Japan Media Arts Festival. The display gave a sense of the processes involved in creating and completing manga, of the places where they are produced.

Mr. Hirano took part in a Talk panel on Saturday September 9. The following day, Miss Hokusai was shown for the first time in Bulgaria. This animation film selected a Jury Selection in the Animation Division of the 19th Japan Media Arts Festival.

An online comic by HIRANO Ryo, an artist active in a wide range of fields such as video and animation. Influenced by the occult culture of “Hollow Earth” theories, a mysterious world existing within a rubberlike cavity in the earth becomes the setting for the story, in which links are drawn with reality. An entire world of cuteness and pop is gradually revealed to the reader.
website:http://www.to-ti.in/product/?id=9 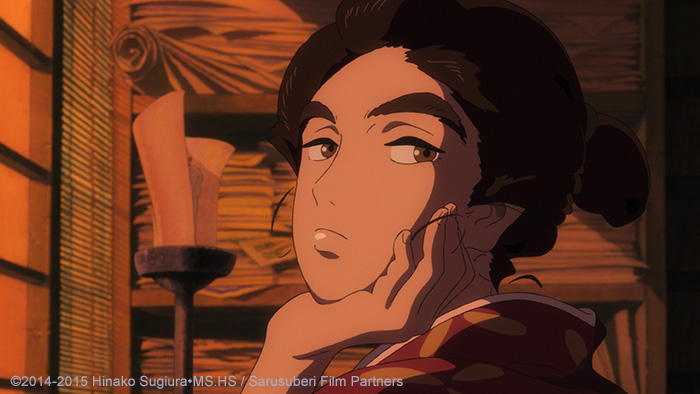 This is a feature-length adaptation of the manga Sarusuberi by SUGIURA Hinako, a researcher of Edo Era customs. It is set in the town of old Edo, a community in Edo that is always emotionally turbulent, including fires and troubles with fairies. The story centers on Oei (later known as KATSUSHIKA Oui), the daughter of leading ukiyoe woodblock print artist KATSUSHIKA Hokusai, and depicts the lives of people in Edo that also have relevance for us today.
(1 h. 29 min.)