We have selected experimental and ambitious Japanese short films that embody unique forms of expression and innovative ideas. With short films, creators are constrained by time limits— they have to depict the worlds they want to create and the thoughts they want to express in a condensed manner. This opens up new possibilities of expression that go beyond the norm.
Centered on Japan Media Arts Festival winners, we will be screening pieces by up-and-coming directors who are not locked down by genres or mediums. Audiences can enjoy the individual qualities of each creator through works that embody unique techniques, narratives, and music collaborations. 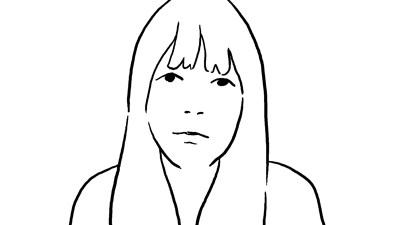 I synchronized the sounds of babies crying and the frustration I've experienced throughout the years. Everyone was born crying and grew up crying. I want to go back to being a baby again.

Sawako KABUKI graduated from the Graphic Design Department of Tama Art University. After joining and later quitting an adult video production company, she completed the Tama Art University Graduate Program.
Her colorful work depicts all aspects of human life and is instilled with humor and affection. 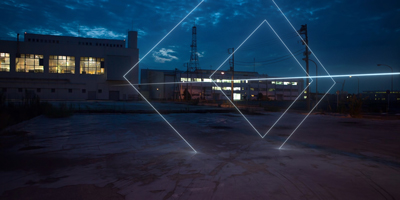 I directed and produced the music video for "Waxing Moon", by Rayons ft. Predawn. The video was inspired by the word "Rayons," which means "ray of light" in French, and the song title, "Waxing Moon". Light is the central theme of the video and it portrays the world at dusk.

Tao TAJIMA is a director and filmmaker. He has created videos like "Night Stroll" using 3DCG software and motion graphics and directed the music video for Tofubeats "Asa Ga Kuru Made Owaru Koto No Nai Dance Wo." He tranforms everyday landscapes through the skillful use of light. 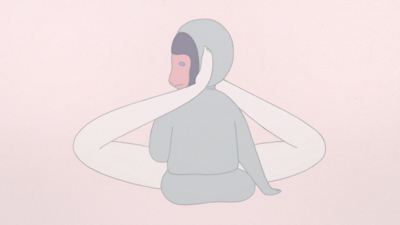 A Kyogen stage. An eye doctor's examination room. A sushi counter. Distance, feeling, and desire drift about between two beings that come into contact in different spaces. In the form of animation, "Veil" rekindles and scrutinizes our familiar sensations, perhaps felt somewhere, sometime.

Born in 1984, Yoriko MIZUSHIRI is a filmmaker who creates sensual animations using unique motifs such as body parts and sushi. 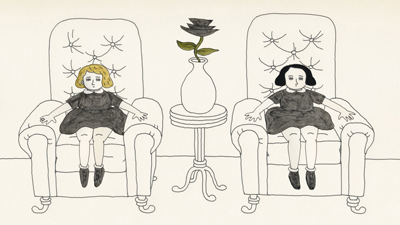 "Rabbit’s Blood" is a story about a society of two rival groups; sinister cloaked men and neutralist rabbits who have human-looking bodies and live underground.

Sarina NIHEI is an independent animation director from Japan. She is a graduate of London's Royal College of Art, where she made a film called "Small People with Hats", which won the Grand Prize at OIAF in 2015. Specializing in hand-drawn animation, she loves to make surreal stories. 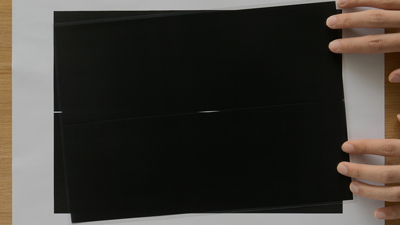 This video was created by layering a sheet of paper and a transparent film drawn with simple patterns to give a multifaceted visual effect. Developing the video involved research on special effect animation methods used before the advent of computer graphics. It was shot by moving the film manually to the AUDIO ARCHITECTURE soundtrack and the video was edited to optimize physiological comfort.

Masaya ISHIKAWA
Born in 1980. After gaining experience at the Keio University Masahiko Sato Laboratory, he joined the creative group EUPHRATES in 2006. He has worked on programs such as PythagoraSwitch, 2355, and 0655 on NHK Educational TV.

Shun ABE
Born in 1991. He graduated from the Department of New Media (Masahiko Sato Lab), Graduate School of Film and New Media, Tokyo University of the Arts. ABE won the Kuri Yoji Award in the competition section of the 2015 ASK? Film Festival and the Mizue Mirai Award at the 21st Campus Genius Awards. 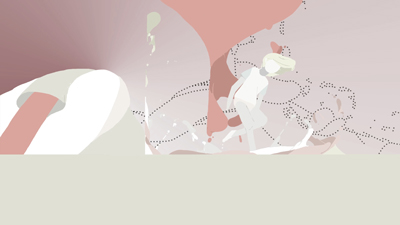 A mind and body attempt to transform. Yet, unable to escape from itself, it returns to its original existence. Self-love is the theme of this metamorphic animation.

Born in 1986. Currently working with the video production company Caviar and residing in Tokyo. 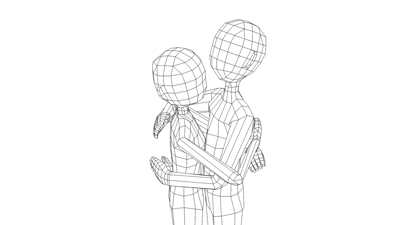 An ordinary story unwinding in a peculiar world.

Ryoya Usuha is a digital artist whose works include CG animation and video games. He recently directed "Toward Hands" and has served as a programmer for the game "My Exercise". 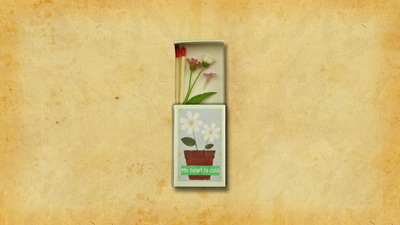 Using match boxes as a motif, "Baloney Speaker" depicts the troubled heart of a young man who, in order to protect himself, cuts ties with others and locks himself up in his inner world. This film exhibits a fusion of numerous tiny worlds made up of 60 match boxes, which were designed and produced by the director himself. Many of the designs are deliberately irrelevant to the song's lyrics; however, Atsushi MAKINO effectively creates extraordinary moments by linking them to key lyrics throughout. Stop motion, rotoscoping, hand-drawn animation, and computer graphics techniques were used.

Born in 1982, Atsushi MAKINO would later major in TV & Film Graphics at UMPRUM in Prague, learning drawing and puppet animation. He acquired an MA in Animation at the Graduate School of Film and New Media, Tokyo University of the Arts. He thrives in film and art direction, character design and illustration, freely crossing genres between live action, artwork and animation. 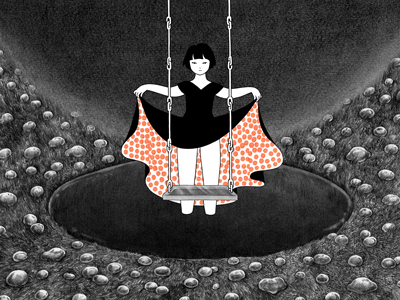 The terrifying pages of the storybook I couldn't help but open. The recurring nightmares. The awfully bitter taste of the yellow fluid flowing out of the joints of the ladybird's legs.
The scary things from my childhood are now nostalgic memories I find to be beautiful. Whether they took place in dreams or in reality, they all remain in my memory as precious nightmares.
"Ladybirds' Requiem" is an animation that lets you take another peek into those recurring childhood nightmares.

Born in Chiba, Japan, in 1980, Akino KONDOH graduated from the Graphic Design Department of Tama Art University and has been living in New York since 2008. Her work spans a variety of media, including manga (or comics), animation, and painting. 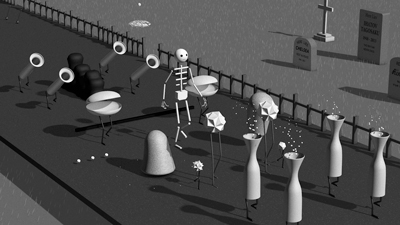 Created based on a project wherein contemporary filmmakers create music videos for 1970s pop music. Singer/songwriter Eiichi Otaki returns from the grave and marches with musical spirits while singing. He imitates Elvis Presley and finally makes his way out into the light. The song incorporates the rhythm Second Line, which is used for funeral marches in New Orleans.

A video artist born in 1980.
ONISHI produces installation works and videos related to music. He pursues his own form of expression in which visual images and music resonate with each other.